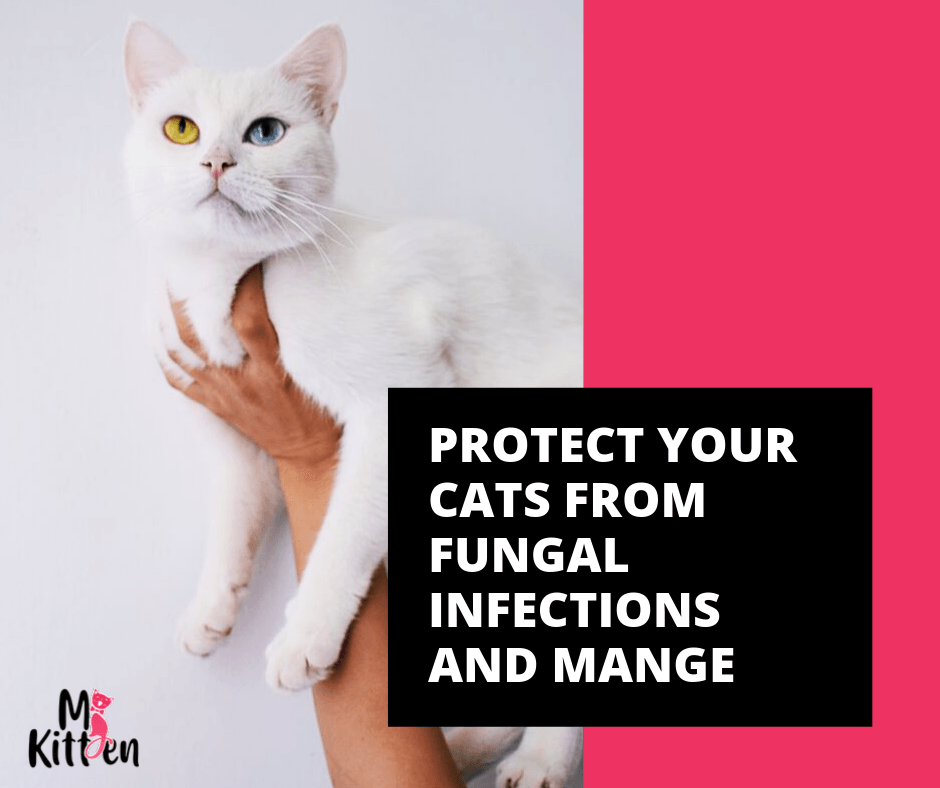 Protect Your Cats From Fungal Infections And Mange

Mostly all these fungi cause skin and respiratory tract infections and also cause damage to the bone and brain. Fungal spores are inhaled by the nose and the infection spreads from the respiratory system to other systemic organs through the bloodstream. In this article, we discuss how to protect cats from fungal infections

There are some of the most dangerous fungal infections in cats discussed below along with the treatments: It is usually found on the cat’s skin(less common). Symptoms include hair loss, skin redness, seborrhoea (crusting, scaling skin), and often the development of a foul discharge or odor on the skin.

A fungus that grows in the superficial layers of the skin, hair, or nails. Cats may become infected either by direct contact with an infected animal or by exposure to a contaminated environment or object, such as grooming tools, clippers, or bedding.

This infection has the potential to infect the skin, respiratory system, bones, and sometimes the brain, causing a diseased state. Also, lesions on the skin surface and swollen lymph glands.

Infects the ear, digestive system along with reproductive tracts.

The infection usually leads to chronic infections of the nose and sinuses and skin ulcers. Other organs such as the spleen and kidney and skeletal muscles can be infected too.

Also Read: How To Check Your Cat For Fever?

These fungal infections are more found in cats than other animals. Mostly infect the nose, sinus, and skin ulcers, seizers, balance problems, and vision problems.

These are also present in the soil but in rich organic material soils. The fungus becomes yeast inside the body and spreads in the bloodstream around to different organs damaging many systemic organs.

We cover full diagnosis to know the cause and eliminate it: Microscopic examination, X-ray, fungal culture, Biopsy are some of the important investigations done in MyKitten.

Also Read: How To Check Cat For Worms?

Mange has symptoms typically include hair-loss, from the cat’s head, eyelids, neck.

On the other hand, Demodex cati threatens cats with immune disorders and metabolic syndrome issues, such as Diabetes.

At Mykitten we will use skin scrapings to diagnose Mange in your cat. We will collect hair samples to identify the specific mite species causing the condition.

If we find any metabolic disorder as an underlying cause, we may undergo other tests. In almost all feline-mange cases, the condition spontaneously resolves itself as the cat’s immune system improves.

The best treatment modalities are cleaning the cat by bathing, cleaning the ears and eyes and cutting the nails by our professional and not to spread the infection further, use our cat formulas for an infected cat stomach, and also anti-fungal medications and supportive care as long as the cat has a functional immune system.

Treatment of the underlying cause will help eliminate the cause. In mild cases, topical therapy is usually effective and includes degreasing shampoos containing benzoyl peroxide, chlorhexiderm, ketoconazole, and sulfur. It is better to treat when the first symptom starts showing than to a progressed state.