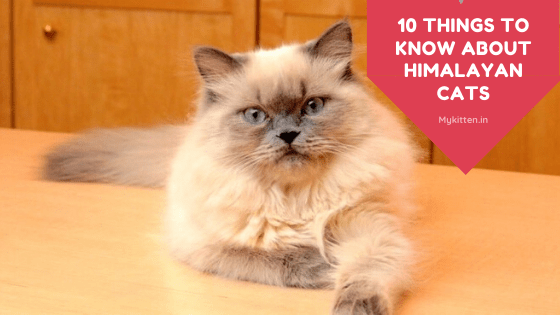 10 Interesting Facts You Need to know about Himalayan Cats

If you are looking for Persian cats for sale online, but at the same time are a great admirer of the Siamese breed, then the Himalayan breed is the best one for you. It is a known fact that Himalayan cats are one of the most loved breeds. Himalayan kitties are considered to be the best of both worlds. Himalayan breeds blend up well with toddlers and other felines. Also, their lovely face fills in all the checkboxes of a perfect kitty pet.  Besides a lot of grooming requirements, this kitty is loved among cat enthusiasts and owners.  Once you get a Himalayan cat for yourself, you are sure to get ample love and affection in return.

Now if you think you are ready to nurture a Himalayan cat or those who already own one and think that they know them very well, it is time that you get a reality check. Go through a list of ten facts that you should be aware of while owning a Himalayan cat.

With their ancestors being Persian cats and Siamese cats, Himalayan cats are a result of crossbreeding between the two species. These kitties have adopted their exotic features from the Siamese and calm temperament from the Persians. These cats come with specially colored faces and ears, similar to Siamese. Earlier when Persian and Siamese breeds were kept together, the result was found to be a uniquely featured cat named Newton Debutante. This kitten had a specially colored thick coat with points. The cat also had a flat face accompanied by ocean blue eyes.

These cats appear big because of their round bodies. They have a long-haired coated with short legs. With their strong and sturdy bones, Himalayan cats can weigh from 7 to 12 pounds with male breeds being even heavier. Their round and flat face look adorable with thick necks. These long-haired cats also come with fluffy tails observed to be straight.

A Himalayan cat is distinguished from other breeds because of its elegant coat.  The main reason behind the breeding of Siamese is to get Himalayan, the one breed with pointed color ends. The resultant cat is one with long, silky, and luxurious hair mostly available in white and cream colors. With distinct color points on ears, nose, and tail like the Siamese, Himalayan cats are sure to catch attention. Also, the Himalayan comes in a color variety of blue, lilac, chocolate, and black. Lilac and chocolate were found to be difficult color points while researching. The coat of a Himalayan cat sways down from its body with a ruffle along with the neck and brief frills near ears and toes.

The Himalayan cats come with a risk of polycystic kidney disease that they have carried from the Persians. To prevent such disease Himalayan cats require a spaying treatment and getting them checked at earlier ages. The feline’s smoothed face could influence its breathing, dental, and eye wellbeing. Likewise, with any pet, your Himalayan ought to be routinely inspected by its veterinarian and get standard vaccines. Legitimate nourishment is vital in every pet. Besides a crisp clean water dish, a portion of nutritious feline food should provide a decent eating regimen to your Himalayan. It’s necessary to keep in mind that the Himalayan is a high vitality feline and will consume calories. With legitimate medicinal services, the Himalayan feline will live a normal life of 8 to 15 years.

The Himalayan is a profoundly versatile breed. All things considered, he isn’t a hardcore partier, favoring a peaceful, calm home. He does well with more established kids and grown-ups, and he isn’t against offering a nestle to more youthful youngsters who treat him delicately — or welcome him to a casual get-together such as a tea party.

Less vocal than the Siamese however more vocal than the Persian, the Himalayan cats fall decisively between the two, imparting his insights with his kin in a musical voice. Yet, he does a large portion of his “talking” with his expressive eyes.

Owners who have Himalayans describe them as cherishing and loving and the felines regularly become joined to their relatives (and in some cases one relative specifically).

They like to snuggle however are not excessively requesting for friendship; this depends on the cat. These keen cats are receptive to human states of mind and feelings and can be chatty now and again regardless of being depicted as accommodating and calm.

Though some people seem to think otherwise, there are only two distinct face shapes for the Himalayan Cat breed. There is the doll face and the Extreme Himalayan, with a flat face. While some prefer the doll-faced one, there are a lot of owners who fancy the flat version.

Himalayan felines have been playfully marked as the best version of Persians and Siamese. While that is a charming picture, obviously it isn’t valid. Regardless of whether Himalayans are a particular breed – there is a lot they have unique– these sweet, accommodating longhairs have enough adorable qualities to praise them for the interestingly uncommon kitties they are. Now when you are completely aware of the breed, you can be a great owner and pet them in the most suitable way.